A telecommunications engineer and MBA who has a strong passion for creative writing. He is a long-term consultant in the field of management and leadership, as well as a lecturer for the topics like company management, writing a business plan, human resource management and the like.

While you are here, see other health-related calculators, such as LDL Cholesterol, or maybe you are interested in this Maddrey’s Discriminant Function post.

Glycemia means the glucose level in the blood, a carbohydrate from a vital energy source for the body. It is a simple type of sugar found in a specific kind of food, primarily fruit, and one of the essential energy sources in the blood and animal body fluids. When glucose is introduced into the body, it will be absorbed in the intestinal circulatory system. Under normal physiological conditions, the body will keep excess glucose in a polymerized state inside the liver and muscular system. Determining glycemic levels is one of the most important diagnostic procedures in diabetes mellitus and other disorders.

The level of glycemia in the body depends on glucose ingested with food, hormonal regulation, and deposited reserves in the body for later use. Two hormones in the body are responsible for maintaining a balanced concentration of blood glucose levels: glucagon and insulin.

Here is one example.

Convert blood sugar mmol/L to mg/dL and opposite

You can use mmol/L and mg/dL units to measure blood sugar levels. These measurements express the blood glucose concentration values, although in different ways.

The International Standard Unit (ISU) for measuring blood glucose concentration most commonly used is mmol/L, and for people without diabetes, it usually varies from 4 mmol/L to 6 mmol/L. However, measurements in mg/dL are also used to a lesser extent.

If you want to translate data from mg/dL into mmol/L, the value obtained is divided by 18. So the formula for calculating mmol/L from mg/dL is as follows:

If the situation is reversed and you want to have glucose values ​​in mg/dL, you can use the following formula to calculate mg/dL from mmol/L:

Regardless of which units of measurement, regular blood glucose measurements are vital!

Glucose units – how does our blood sugar converter work?

Our blood sugar converter helps you easily convert data from mmol/L and mg/dL and vice versa. All you have to do is select the basic unit in which you measured the blood sugar level, and the converter will use the built-in mathematical formula to output the amount for the second unit.

Insulin is a hormone secreted by the pancreas that keeps blood sugar levels within normal limits. It binds to special receptors on the cell and signals that the blood glucose level is high. It allows glucose to enter cells and store like glycogen or split down and used as an energy source.

Glucagon is a hormone secreted by the pancreas when low blood sugar levels. Glucagon signals the cells to release glucose into the blood. Adrenaline also affects glucagon secretion so blood glucose levels can occur under stress.

The body maintains an average level, which is a value that you can measure in the morning or several hours after a meal. These levels are 3.8 to 6.9 mmol/L of blood. These values can rise to two hours after eating and drinking.

1. What level of blood sugar is dangerous?

2. How do I convert American blood sugar to Canadian?

For the measurement of blood sugar levels in the USA, the unit of measure is expressed in mg/dL, and for the area of Canada, it is in mmol/L. To convert American blood sugar to Canadian, we must multiply the mg/dL results by 18.

3. How to convert blood sugar to a1c?

It is most common for successful blood sugar regulation to be assessed by glycosylated hemoglobin HbA1c values. It is recommended to measure A1c at least once a year, and it is better if you can take it every three months or every six months. A value of less than 5% is usually considered optimal, and less than 7% is deemed satisfactory. This measure is correlated with the average blood sugar values in the last three months.
To convert blood sugar from mg/dL to A1c, you can use the formula directly, or use our convertor for an easy way.
28.7 \cdot HbA1c - 46.7 = eAG (mg/dl) 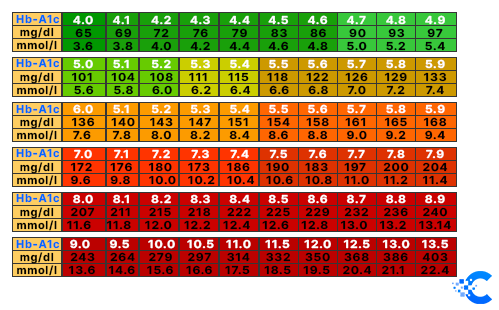 4. How much does 1 unit of insulin decrease blood sugar?

Insulin therapy is currently the only way to prolong the life of people with type 1 diabetes and severe type 2 diabetes. Correctly calculating the required dose of insulin allows you to mimic the natural production of this hormone in healthy people.
One unit of insulin can lower the blood glucose by 50 mg/dL or 2.78 mmoL/L. This decrease in blood sugar can range from 30-100 mg/dL or more, depending on personal insulin sensitivities and other circumstances.

5. What are the normal blood sugar levels for children and pregnant women?

Acceptable blood glucose levels do not differ for children and adults. Of course, the concentration of sugar in a child’s blood depends on the measurement time, i.e., whether the child has recently eaten or drunk (which also applies to adults).
Due to the increasing incidence of type 2 diabetes as a result of being overweight and developing insulin resistance) in children, you should ensure that the child eats healthily and is physically active. Diabetes in children is most often detected between the ages of 10 and 13 when insulin requirements are increased at puberty. Type 2 diabetes also occurs earlier in childhood.

Commuting is a big part of your working life, so it’s a good idea to get the facts before you start working. You can use […]

For every sized tiling project, this thinset calculator can help you respond to the question, “How much thinset do I need?” Have you ever had […]

A logarithm is when you take a number to a specific power so that the result is another number. For example, if you multiply 2 […]