Perimeter of a Polygon Calculator

An electrical engineering student who is passionate about programming & electronics. He spends his free time teaching math and physics.

With the perimeter of a polygon calculator, you can calculate the perimeter of any polygon. Since our childhood, we all studied shapes like triangles, squares, pentagons, etc. Enter polygons! Most of those shapes are, in fact, just special cases of polygons. The word polygon originates from the Greek language, which doesn’t surprise you when you look at many geometry findings from Ancient Greece. Polygons are the main field of study in geometry and algebra in general. The perimeter of such a shape gives us more insight into the shape itself. That is necessary if we want to describe, for example, shapes in two or more dimensions. You can use our calculator to find the perimeter of any polygon.

What is the perimeter of a polygon?

Any shape in two dimensions (on the flat surface) is often described with its area and total length of all sides. That total length is called the perimeter of that shape, and it’s one of the main properties of the polygon. So polygon is the general case of 2D shape with flat edges. It’s important to note that polygons can’t have less than three edges.

How to find the perimeter of a polygon?

Unlike shapes like circles and ellipses, finding the perimeter of a polygon is relatively easy – sum the lengths of all the edges. Sometimes all the edges will have the same lengths (regular polygons ), so this process shortens to just the multiplication of two numbers. We find shapes like that are most often in architecture and similar places where symmetry matters.

However, this world is full of irregularities, so we often have to use the first method. Take, for example, rectangle. Unlike its cousin square, a rectangle is not a regular polygon. Therefore, the value of its perimeter cant be calculated by simply multiplying four by a single number. The solution is to add lengths of all the sides, which is easy for the rectangle (more on this in articles of our Calculator for the perimeter of a rectangle). And of course, there is our calculator whenever you need it.

Perimeter of a polygon formula

Finding the perimeter of a polygon, in general, is not difficult at all. It is just the sum of lengths of all the edges, or in mathematical notation:

Where n is the number of sides of a polygon and the length of the n-th edge. If all sides have the same length, then the formula becomes:

For concrete examples, there are formulas where we can calculate perimeter as a function of other shape properties like diagonals, surface, etc., and the result will still be right. Still, those are special cases, and you will often use the formulas above.

We separate polygons by multiple criteria, like:
By the lengths of sides, they can be regular or irregular. Regular polygons have equal lengths of all the edges( squares, regular pentagon, etc.), and others are irregular.
By the number of sides, they can be triangles( 3 sides), quadrilaterals(4 sides), pentagons (5 sides), hexagons( which are six-sided), etc.
By their interior angles, we divide them into concave( at least one angle is more than 180 degrees),
convex( all angles are less than 180 degrees) and equiangular(actually, a special case where all angles are equal, like a square).

How do you find the perimeter of an irregular polygon?

The perimeter of an irregular polygon can be calculated simply by summing lengths of all of its sides by using the formulae above.

How to find the perimeter of a polygon with coordinates?

In a coordinate system, the process is a little more complicated. First, we find the distances of two points that are supposed to be ends of edge for every edge, according to the formula:

Now all we have to do is just sum all of the lengths.

What is the perimeter of a regular polygon?

The perimeter of a regular polygon can be found as a simple product of the number of edges and length of a single edge (since all edges are the same).

What is the area of a polygon?

For any 2D shape, the area measures the space enclosed by its edges. Along with perimeter, it is one of the main characteristics of a shape. For regular polygons, this formula is:

Where P is the perimeter of our polygon and h is the shortest distance of the edge from the center of a polygon( apothem). We can easily derive this formula by dividing our shape into multiple isosceles triangles( with two equal sides) and calculating the area for those triangles. 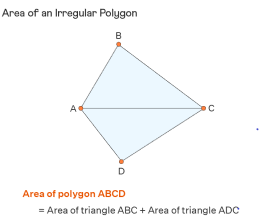 What are 12 types of polygons?

The main way to differentiate polygons is by the number of sides. Triangle has three sides, quadrilaterals have four sides, the pentagon has five sides, hexagons have six sides, heptagons have seven sides, octagons have eight sides, nonagons have nine sides, and so on.

You plan to lose weight, but you don’t know how to calculate how many burned calories (kcal/min) you can get per workout? Don’t worry a second because […]

Today, calculators make many things easier. No more hours of torture to check that the calculation is correct. Nowadays, we enter everything we need for […]